Back in 2017, we discussed two blockchain pilot projects that were arising in the commodities and energy markets.

However now, there are dozens of ongoing projects across the metals, mining, agricultural, gas, power, oil markets, and beyond. Major firms to merchant traders, and even niche start-ups, are finding their place in the blockchain environment cross physical and financial trading.

Despite being reported to be part of the “Forcefield” initiative earlier this year, the London Metal Exchange is not a member currently. The blockchain project aims to track the trade of physical metals, and is supported by some of the world’s largest metal traders, including Swiss-based Mercuria, in addition to Macquarie, and ING.

Alongside the Forcefield initiative, Mercuria have also invested in other enterprise blockchain ventures – the first being in VAKT, of which it was a founding sponsor. Within the energy markets, VAKT has launched into its first market, North Sea oil, in November 2018.

Since, they have built large resource pools in Lisbon, and are not processing over 90% of post-trade transactions for Brent crude. With a new CEO, Etienne Amic, on board as of February 2018 and Bart Bream joining from Mercuria as the new CTO, VAKT are undoubtedly looking to expand – targeting the Houston and American oil markets in particular.

Moreover, Mercuria have also set up the ‘Mercuria Technology Ventures (MTV)’, which aims to revolutionise the way that energy and commodities operates, through targeting investments in blockchain and AI. According to Mercuria’s CIO, Cyril Reol, the MTV project will “provide a structured framework to assess and invest in opportunities as a fit with Mercuria’s technical and business needs.”

The investments aims to steer slightly from using distributed ledger technology (DLT) by moving more towards leveraging the internet of things (IoT), AI, and machine learning. “Our strategy of co-development and socialising efforts and benefits across the industry to encourage change and early adoption has proven to be effective,” added Reol.

The four largest agricultural players globally – Archer Daniels Midland, Bunge, Cargill, and the Louis Dreyfus Company – have been working alongside Chinese-owned COFCO International on a blockchain initiative within the agriculture and softs markets. The five firms announced that Glencore Agriculture would be joining the digital platform in September 2019.

ING executed the first commodity trade transaction on Komgo in 2019, issuing a Letter of Credit on behalf of Mercuria Energy trading. Fifteen shareholders, spanning some of the largest financial players and commodities traders, are now working with the platform.

As one of the more traditional industries, businesses in commodities trading have invested millions into these new blockchain consortia. By pooling resources and working with cross-functional and cross-desk trading teams, businesses like BP, ABM-Amro, Equinor, Guvnor, Chevron, ING Shell, Mercuria, Koch and TOTAL are able to work with one another to ease the process of trading.

Additionally, the ICC TradeFlow platform in Singapore has facilitated Trafigura to ship iron ore to China from Africa. The deal transacted was with US$20 million. Given that Trafigura refused to engage with the consortia, this deal indicates that their lack of confidence was in the consortium itself, not the technology.

Despite the support by some of the biggest names in commodities trading, smaller businesses are still given room to grow in the space. For example, Swiss-based start-up, Rice Exchange, has recently partnered with Fujitsu to reduce the inefficiencies around some of the world’s most traded agri-commodities.

Additionally, Satoshi Systems, a business that focuses on providing commodity trade finance solutions to SMEs within agriculture, metal, and emissions, was founded by Saurabh Goyal, ex-Head of IT at Olam. Other senior technology individuals, including those form Glencore, have moved towards consulting for various businesses that are exploring the blockchain space.

As far as we have come in the last two years, as blockchain has entered the commodities and energy trading markets, there is still room to grow. Much of the technology is being used in the trade confirmation and settlement space, facilitating the middle and back offices of trading floors.

The growth and expansion of blockchain initiatives has resulted in a growing demand in recruitment initiatives in the space, as well as an increased demand for individuals with the relevant skill sets. For example, Shell is building out ‘Centres of Excellence’ in Houston, London, and the Netherlands, to build blockchain teams and initiatives. The project has included hiring “Blockchain Managers”, who are able to identify and develop new opportunities for Shell within the blockchain space.

Naturally, businesses with more disposable income are often at the forefront of these hiring initiatives and are creating ventures to further the integration of blockchain into their trading businesses. However, smaller businesses – or those with tighter margins – are realising that the increased efficiency provided by blockchain is an ongoing investment that will help to propel their businesses.

by Emma Jonesview my profile 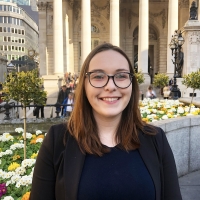